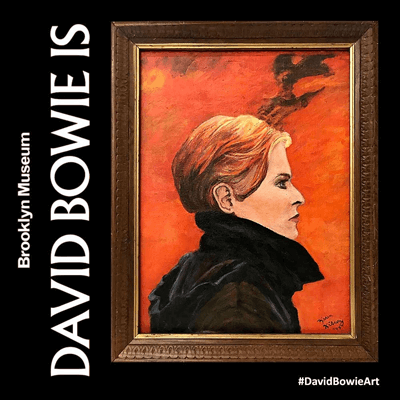 
My painting of David Bowie that resurfaced 40 years later in his collection..

Last month, I got the surprise of my life when I found out on Twitter that David Bowie kept the painting I made for him in 9th grade art class and gave to him in April, 1978 in Richfield, Ohio. I just happened to see the tweet of a photo that a fan took while touring the David Bowie Is exhibit in Brooklyn, New York.

My meeting with Bowie happened right around the time Bowie's album Low was released, and my painting was a copy of the cover. Apparently, the fan art meant a lot to Bowie, and so he kept it all those years - 38 years until his death. It was Bowie's dream to have his collection of fan art displayed in a museum, and his dream came true this year at the Brooklyn Museum.

I had signed the painting which was enough for the museum to take my word for it that I was the artist. But if they hadn't believed me - let's say there was more than one Karen Kilroy saying they painted it - how would I ever prove that it was mine?

Ah, the 70's. Shag haircuts. Thrush tailpipes. Bell bottom pants. Push button princess phones. And blockchain? Not so much. One problem with blockchain in 1978 is it would have had to run on a Radio Shack TRS-80 computer and be replicated by cassette tape, or via acoustic coupler for the very well-to-do. But imagine for a moment that blockchain was possible then. What if, as I put the finishing touches on my Man Who Fell to Earth painting, my art teacher taught me how to embed a crypto anchor into my artwork that uniquely identified it? And what if that crypto anchor was recorded permanently on the blockchain and made part of my "permanent record" at the school?

What if as the 1980's rolled in and I reached adulthood, I was given my very own copy of my blockchain with my art records, all of my school transcripts, and other critical information? Right around the time Bowie released his mega hit Let's Dance, I should have been able to have my copy of the shared ledger from high school on my very own 5-1/4" floppy disk which would run under DOS on any IBM PC. My copy of the blockchain could always be checked against the copy the school holds to make sure it was not tampered with. 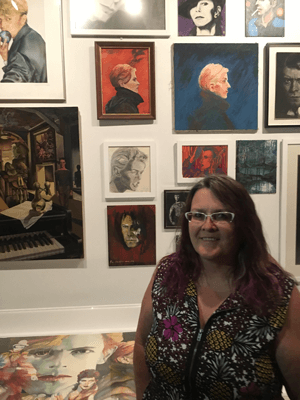 Karen Kilroy at the Brooklyn Museum in front of the painting she gave to David Bowie, 40 years later


Now imagine that the museum wants to find out who did my painting, as we listen to Bowie's final release, Blackstar. They scan for the crypto anchor. The national registry of high school blockchain narrows the crypto anchor down to my high school. My high school verifies that I am the artist and tries to alert me of the inquiry. When I visit the painting and identify myself, I can do so with a hash from my blockchain, proving the painting that I handed to David Bowie in 1978 is indeed the same one that is on the wall in the museum.

Blockchain 2018 is so much easier than Blockchain 1978 would have been! Nowadays we can store our blockchain in the cloud. Even though each participant in a network has their own node, they can run in the cloud for the convenience of the participants (no messy 1980's diskettes!) Blockchain provenance can protect artists and help them to claim their work years later. It can connect the various works of tomorrow's Rembrandt or Picasso into a traceable collection that can flag fakes, giving artists the credit they deserve.