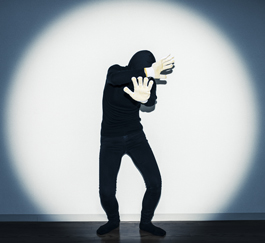 The sound of the blaring horn was ear-splitting, and the spotlight blinding. The would-be burglars froze in their tracks. Petrified and confused, they decided the commotion would be too much to overcome. What a close call! They only hoped that the passersby and neighbors didn't call the police.

This blog is about how to keep honest people honest - by removing temptation.

Keeping honest people honest was the premise of a burglary deterrent system that my dad, Tom Kilroy, branded and marketed throughout the United States. Instead of breaking into small businesses, potential criminals were scared away because they didn't know what was happening and feared detection. This simple deterrent worked - my dad would visit the same remote gas stations 6 months later and be met with gratitude. This was because these customers - some of which were being broken into weekly - hadn't had a single break-in since they bought his device.

Take the same premise and apply it to, for instance, local school district bookkeepers. Responsible for millions of dollars, using systems with no reliable audit trail, the temptation could be enormous to free their family from burden by embezzling funds.

This type of temptation is unnecessary, since the same type of deterrent is available for any computer system. This deterrent can be easily integrated or written from the ground up with the intent to keep honest people honest by providing a tamper-evident audit trail.

This deterrent is called blockchain. Blockchain technology can be used to augment any system to make a tamper-evident audit trail which is available to all stakeholders. By tamper-evident, I mean that the data could undergo even a brute-force attack where it is changed at the file system level, or deeper. Blockchain doesn't prevent this. But what blockchain does is provide a way to prove tampering, because multiple instances of the blockchain exist - each stakeholder often has their own - and hashes tied to content will not compute to the same value as on other instances, if the content has undergone tampering on a single instance.

In addition, smart contracts and surrounding role-based workflow systems can be used to fully automate business processes, so contractual conditions must be proven within the system before transfers of money can even take place. This can help make sure that obligations are met and that all parties are fully accountable.

Note, this type of blockchain application doesn't involve miners or expensive electricity. To learn more about how blockchain works, please visit my report on O'Reilly Media, "Blockchain-as-a-Service." which is available at https://www.oreilly.com/library/view/blockchain-as-a/9781492073475/ch01.html (Requires a subscription or a trial subscription to O'Reilly - no credit card required).