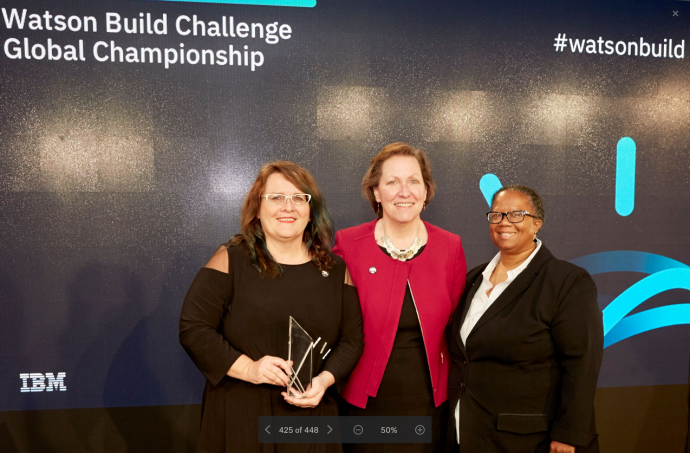 AUSTIN – 27 December 2017: Kilroy Blockchain has been named the Watson Build North America Champion for its cognitive business prototype, Riley (RealLife Adventure). Built on IBM Cloud with Watson Content Hub, Watson Text to Speech and Watson Visual Recognition, the solution is designed to help put cognitive technology into the palms of people who need it most, the blind and visually impaired.

We live in a primarily visual society; we receive approximately 80 percent of our information through our vision (source: American Foundation of the Blind, VisionAware). This puts the 253 million blind and visually impaired persons (81 percent of whom are ages 50 and up, and 19 million of whom are children) at a disadvantage (source: World Health Organization Fact Sheet Oct 2017).

Riley (RealLife Adventure) combines Watson AI technologies and IBM Blockchain to create an intuitive application that uses AI and machine learning to identify and paint a vivid picture of the user’s surroundings through a detailed audio description.

The app has two main features. One feature looks around based on the users’ geolocation and the other analyzes user photos. When a query is submitted, the Riley server interacts with Watson Content Hub and uses Watson’s Visual Recognition to provide details about what it recognized based on data that has been verified and stored. This process enables a quick, consistent and reliable experience.

From beginning to end, Riley interacts with a human-like voice generated by Watson’s Text to Speech. The voice is designed to be soothing and invites users to employ their imaginations while the detailed verbose audio descriptions help the user visualize what is being said.

“Watson Build helped us to rapidly prototype so we can put this very much needed technology into the hands of the people who inspired us to build Riley. Within just a few months we were able to develop an award-winning app that we plan to launch at the Consumer Electronics Show in Las Vegas on January 9. The real win will be watching the impact Riley makes for our users every day and removing barriers to education, both in the workplace and socially,” said Karen Kilroy, CEO, Kilroy Blockchain.

The Watson Build challenge is IBM’s first cognitive challenge designed solely for Business Partners. In phase one, IBM received hundreds of business plan submissions from business partners around the world. In phase two, select Watson based solutions were chosen to progress to the next phase where partners will build working prototypes to demonstrate these cognitive products and services. In phase three, eight finalists were selected – one from each geographic region, plus one wildcard – to represent their region and compete at the Watson Build Global Championship in New York City on November 2, 2017.

“Our future is brighter because of creators and innovators like our Watson Build Regional Champions, who are working to solve real problems for people around the world using IBM Cloud and Watson technologies,” said John Teltsch, General Manager, IBM Global Business Partners. “I congratulate Kilroy Blockchain on their achievement and look forward to driving mutual success with them as they work toward launching their solution into the marketplace.”

As part of the Watson Build challenge, Kilroy Blockchain received personalized mentoring and technical support from IBM business executives and cognitive technology specialists to help the company bring its concept to life.

Kilroy Blockchain is an IBM Business Partner in IBM PartnerWorld, a program that gives channel partners resources and tools to help them succeed in the Cognitive Era.

Kilroy Blockchain is in the business of creating trust by using truth + technology.

As a Platform as a Service (PaaS), Kilroy Blockchain bridges the gap by providing an easy-to-use way of integrating third-party applications with enterprise level blockchain and artificial intelligence solutions.

Any industry, anywhere, their goal is to make it easier for regulated industries to meet regulator demands by capturing consensus and enforcing compliance.

Solutions based, Kilroy Blockchain is a team of dreamers, makers and doers using technology to create products driven by one purpose – to leave the world better than we found it. Kilroy products include:

Kilroy Blockchain is based in Austin, Texas with offices in Denver, Colorado and Kathmandu, Nepal.